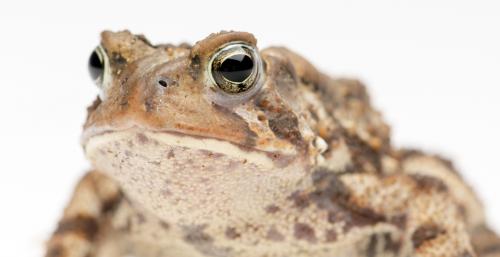 Nova Scotia is home to eight species of frogs. With the exception to toads, frog skin is smooth and moist. Some parts of their life cycles happen in the water. Frogs are amphibians.

Frog faces have two large, exposed eardrums called the tympanum. They have two bulging eyes with clear lids and an inflatable vocal sac. The vocal sac is located near the throat or along either side of the throat. It is used to make vocalizations sound louder and stronger during the mating season. Frog mating season happens in the springtime and occasionally during the summer.

In the spring and early summer, frogs will gather in wet habitats for mating season. The males arrive first and use their vocalizations to get the attention of females. Each species has its own unique call and is distinctive enough to recognize from the rest. Once a female locates and joins with a male, the male will climb on top of the female in a mating position called amplexus. After amplexus, which is the fertilization process, the eggs will quickly hatch into tailed tadpoles. Development into adult frogs can take from two months up to two years depending on the species and environmental conditions. Frogs, frog eggs and tadpoles are generally vulnerable to predators. They are eaten by large beetles, turtles, birds, snakes, fish and mammals.

The eastern American toad, spring peeper, green frog, wood frog, leopard frog and pickerel frog are found across Nova Scotia. Mink frogs are only known to live in a few areas of the Province, and there are no known reports of bullfrogs on Cape Breton Island.