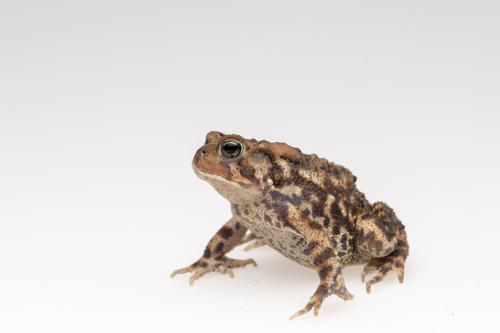 American Toads are tan and brown to red with small dark spots on the back. Breeding males have a black throat and are smaller than females. Toads have dry “warty” skin. The “warts” are actually glands that contain a white, sticky substance. This substance can be harmful if eaten and is used to keep predators from biting the toad. Their bellies are white with grey spotting. Behind each eye is a kidney-shaped parotid gland. Toad legs are short. Their hind feet have some webbing between the toes and special small knobs for shoving soil aside. This allows them to slowly sink into the soil as they bury themselves. Newly hatched tadpoles (larvae) are legless with a long tail. They are black developing more brown and brass tones with golden spots as they age. Toad calls are a high-pitched trill.

Adult males range from 4.9cm to 7.6cm in length

Adult females range from 5.7cm to 11 cm in length

American Toads are widespread across Canada. They range from Manitoba east to the Atlantic Provinces. In Nova Scotia, they are common through all regions of the mainland and Cape Breton.

American Toads have flexible habitat requirements. They can be seen in all types of forested areas. Breeding habitats require either permanent or temporary water bodies, including wetlands, swamps, sheltered bays and small streams. Hibernation happens under the frost line. Burrows are dug in mammal dens, in crevices and underground cavities.

Toads will eat anything they can catch, but typically forage for a variety of invertebrates. Prey animals include insects, ants, beetles, slugs, spiders, mites and snails. Adults have been known to swallow sand, gravel, moss, and spruce and fir needles. Some will also eat their skin after it has been shed.

American Toads emerge from hibernation in the spring and are often the last amphibians to hibernate in the fall. They are active between April and October. Breeding happens over a one-to-two-week period between April and June. A process called amplexus is used. This is when the male uses his front leg to grab the females' body, causing her to release the eggs, which are fertilized externally. Toads will often return to the same breeding sites every year. Females will lay up to 15,000 black and cream coloured eggs in two long strings. The number of eggs produced is strongly related to body size. The eggs develop quickly, hatching in two to seven days. Tadpoles (larvae) develop into juvenile toads in approximately two months. Males reach sexual maturity around two years of age, while females reach sexual maturity around three to four years of age. Their lifespan is estimated to be around seven years old.

Their populations are believed to be stable. The loss of breeding ponds and forest habitats do pose significant threats to American Toads. Other factors like climate change, pollution, road mortality, and the use of the herbicides and pesticides also pose long-term health risks for these frogs.