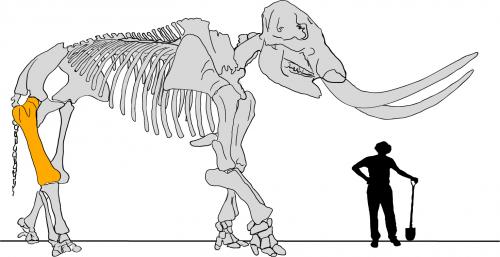 An animal slowly travels through the mixed forests of Nova Scotia, feeding on the plentiful conifer trees surrounding it. It is huge, covered in dense brown hair with bone-like structures growing from its head. Its presence is formidable, concerned about predation from only the strongest, most cunning of hunters. Today, this description most likely conjures images of the mighty moose that roam Nova Scotia. But over 80,000 years ago, there lived a mammal that dwarfed even those impressive creatures. The mastodon.

Standing as tall as a basketball net at the shoulder (3.25 m) and weighing as much as six cars (11 tonnes), mastodons were among the largest of the ice age animals. To fuel such a massive body, huge amounts of food would need to be eaten daily. Mastodons were browsers, like our modern moose, and would fill their bellies feeding on branches, twigs, leaves, and wetland plants. Food sources like these would have been in plentiful supply in the mixed conifer forests that dominated the landscape, like old growth versions of the forests we see today. Mastodons would have felt most at home in forested areas, surrounded by food and sheltered from the weather.

When you hear the word mastodon, what comes to mind? Long, dense fur? Longer, curved tusks? A massive animal wandering a windswept, lonely plain? You might be thinking of a mammoth. It is understandable that they could be mistaken as one in the same. Although they were distantly related and had some things in common, they were very different animals.

Mastodons diverged from a common ancestor of mammoths and modern elephants around 26 million years ago, plenty of time for differences in their behaviour and characteristics to take shape. If we could see them side-by-side, a few of those differences would be obvious. Mastodons would be smaller, their tusks shorter and less curved. They would have a longer tail, but shorter, dense hair. Their skull would be noticeably flatter.

Other differences would only be seen by getting up close and personal. If they both opened their mouths, it would reveal one of the most important differences – teeth. The mastodon would have deeply ridged teeth, ideal for chomping down on their meals. The mammoth would have flattened teeth with short ridges specialized for grinding their food to a pulp. 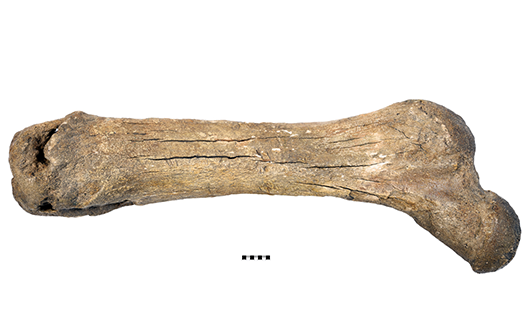 What Their Differences Tell Us

The differences between mastodons and mammoths provide valuable insights into how they lived. The long tail of the mastodon is a clue that they preferred warmer temperatures. Animals that live in cold environments usually have shorter tails to prevent frostbite. Since we know mastodons lived in warmer climates, its likely they had shorter fur. The different teeth tell us that they also lived in different habitats. The crushing molars of the mastodon were perfect for feeding on woody twigs and branches, meaning they lived in forests. The flat, grinding teeth of the mammoth were ideal for grinding up grasses, telling us they lived in plains and grasslands. 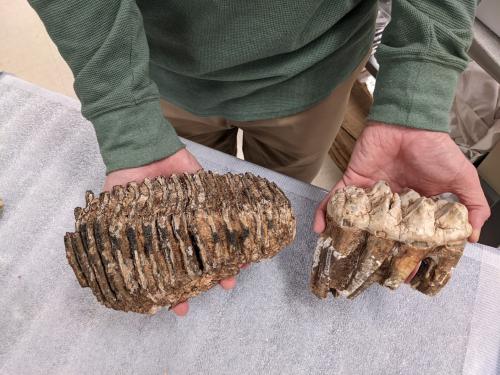 The right tooth is from a mastodon, ideal for crushing tree branches. The one on the left is from a mammoth, perfect for grinding grasses.

Mastodons lived in Nova Scotia on and off for more than 70,000 years, their migrations directed by the growth and shrinking of massive ice sheets. Although they would eventually be brought to extinction about 11,000 years ago, evidence of their lives here remains. Over the past two hundred years, traces of the elephant-like giants have been uncovered, with the promise of more discoveries to come.

Mastodon fossils are a rare find in Nova Scotia. Only a handful of sites have been discovered with confirmed remains. Though not often found, these fossils provide us with important information about where, when and how mastodons lived. Discoveries are usually stumbled upon by accident. Individual teeth have been dredged from the seafloor, a leg bone was accidentally dug up by a farmer, and skeletal remains have been uncovered in gypsum mine sinkholes.