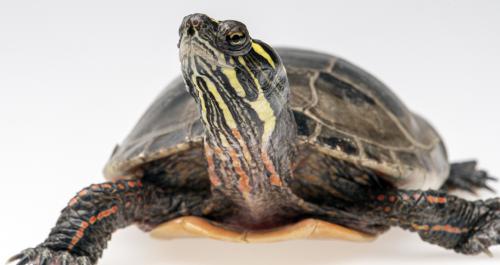 Turtles are reptiles. Typically, the first thought that comes to mind when you think of turtles are their shells. The top part of the shell is called the carapace, and the bottom part is the plastron. Other features include dry, scaley skin, a sharp-edged beak instead of teeth, good eyesight and hearing, and leathery-shelled eggs, which they bury in soft substrate like sand.

There are over 300 species of turtles currently known around the world, with 7 of those species residing in Nova Scotia. Three of these are giant marine turtles: The Atlantic Loggerhead, the Atlantic Ridley, and the Atlantic Leatherback. These turtles are often seen from boats and do occasionally get tangled in fishing gear. While they do visit our waters every summer, these species nest in more tropical regions of the world. All marine turtles are considered endangered species.

In addition to the three marine turtles mentioned above, Nova Scotia has four species found in freshwater habitats. A name used to describe freshwater turtles is “terrapins”, and those species that live entirely on land are called “tortoises”, although we have no wild tortoises in Nova Scotia. While adult turtles have very few predators, other animals like crows, bears and raccoons will dig up turtle nests to eat the eggs and hatchlings. All four turtle species in the Province are considered “at risk”.