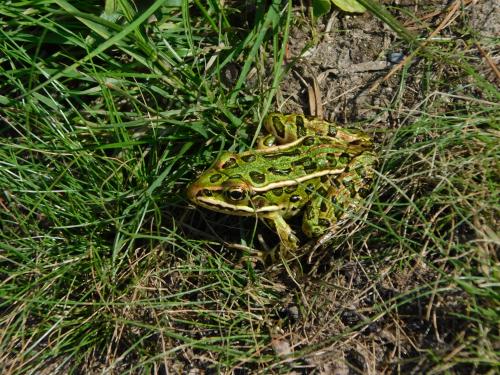 Mi’kmaq Translation: To be Confirmed

Northern Leopard Frogs, also referred to as meadow or grass frogs, are bright grass-green to brown. Although rare, it is possible to see blue green Leopard frogs. Their upper lip and belly are white, with a yellow tinge on the belly. The legs have dark stripes, the front legs are unwebbed, and the back legs are webbed. The total number of oval spots on the back ranges from 8 to 23. Tadpoles (larvae) have long tails and are born legless. They are a light to dark brown or green, sometimes spotted and with bronze bellies. Their call is often described as sounding like a finger being rubbed across a wet balloon.

Adult females range from 6.6 to 9.5cm in length

Leopard Frogs have a large Canadian range. They can be found in every Province and in a small area of the Northwest Territories. In Nova Scotia, they can be seen across the mainland and Cape Breton Island.

These frogs hunt for food in grassy places during the summer. You may find them in fields, meadows and grassy wooded areas. Breeding happens in wetlands, streams and shallow river habitats. Juveniles are often seen resting on sphagnum mosses. Hibernation happens at the bottom of lakes and large ponds.

Leopard Frogs hunt in grassy areas for insects and other invertebrates. This also means that they help eat and control agricultural insect pests. Common invertebrate food for these frogs are spiders, ants, grasshoppers, worms and beetles.

Leopard Frogs emerge from hibernation in the spring. They are active from mid-May to October. Breeding season happens in the spring and uses a process called amplexus. This is when the male uses his front leg to grab the females' body, causing her to release the eggs, which are fertilized externally. Breeding males can be recognized from females by the swollen base of the thumbs on their front legs. This is related to the tight holding they do during amplexus. The female will lay up to 5000 eggs in a large, jelly-like mass in shallow water. The egg mass is attached to aquatic vegetation within a few meters of shore. The eggs are black on top and white underneath. They will hatch in one to three weeks depending on the water temperature. The tadpoles (larvae) will develop into adults two to three months later. Newly hatched tadpoles will stay in a close group for their first few weeks.  Adults return to their aquatic habitats in the autumn to hibernate. Sexual maturity is reached two to three years after development into an adult. Their lifespan is estimated to be no more than five years.

COSEWIC: Not at Risk

The loss of wetland and shoreline habitats pose significant threats to Leopard Frogs. Other factors like climate change, pollution, road mortality, and the use of the herbicides and pesticides also pose long-term health risks for these frogs.