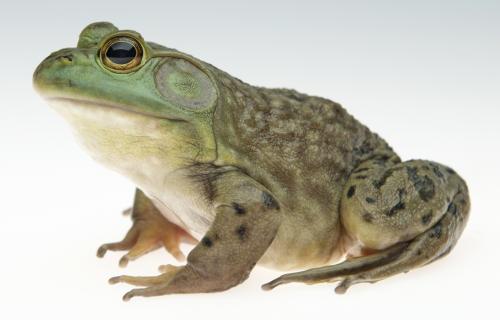 Bullfrogs are the largest frog species in Canada. They can be identified by a thick fold of skin that tracks above the eye and behind the tympanum. The tympanum is the ear drum, which can be used to tell males from females. In males, the tympanum is larger than the eye, while in females, it’s about the same size or a little smaller than the eye. Tadpoles (larval stage) have long tails with a larger fin. They don’t have front legs. Adults vary from green, yellow green to olive. In some, you may see distinct spots or no patterns at all. Although rare, blue green frogs are possible. This colour happens because of a lack of yellow pigmentation. The belly is cream to white, and some may have spots or patterns. Toes on the front legs are unwebbed, while the hind legs are strongly webbed, and the skin has a dark cross-band pattern. The bullfrog call is deep and booming. It is often described as saying “jug-of-rum" or a repeated “rum-rum-rum" sound.

Newly developed young range from 4.4 to 5.4cm in length

Bullfrogs can be found from southern Ontario and Quebec, east to the Atlantic Provinces. In Nova Scotia, they have a few localized populations Northeast of Halifax. Others have been noted in the Cumberland County region and throughout the St. Mary’s river watershed. There are no known reports of this species being found in Cape Breton.

These frogs prefer aquatic habitats with plenty of vegetation and water lilies. They can usually be seen in lakes, rivers, streams and wetlands.

Bullfrogs are quite opportunistic and will eat almost anything that they can catch. Their diet has a wide range of invertebrates and vertebrates, including small birds, other frogs, fish, their own tadpoles, rodents and insects.

Bullfrogs hibernate over the winter months and are the last to become active in the spring. The peak of activity for these frogs is between April and October. Tadpoles may emerge from hibernation earlier than adults. Breeding happens in June and July using a process called amplexus. This is when the male uses his front leg to grab the females' body, causing her to release the eggs, which are fertilized externally. Breeding males can be recognized from the females by the swollen base of the thumbs on the front legs, caused by the tight holding during amplexus. Females lay masses of 5,000 to 20,000 eggs in shallow water with plenty of vegetation. The eggs are black, surrounded by a clear jelly envelope, and spread out to form sheets near the surface of the water. Development happens quickly, with the eggs hatching in under a week. The tadpoles will grow their hind legs into their second year and continue developing into adults over 1 to 3 years. It can take another 2 to 4 years after reaching the adult stage to become sexually mature. Their average lifespan is 10 years.

The loss of wetland and shoreline habitats pose significant threats to bullfrogs. Other factors like climate change, pollution, road mortality, and the use of the herbicides and pesticides also pose long-term health risks for these frogs.