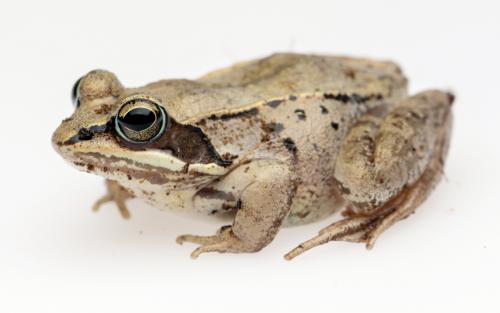 Wood Frogs are a reddish brown to tan colour. They have a dark brown mask on the sides of the head, which has earned them the nickname “robber frog”. There is a white stripe on the upper lip, and a white belly with hints of yellow. They have dark stripes on their back legs, and some black spotting along their sides. The toes on the front legs are unwebbed. Newly hatched tadpoles (larvae) are legless with long tails. They have a light coloured belly, and a dark brown stripe along their upper jaw. The Wood Frog call is a set of “clucks”.

Adult males range from 3.8cm to 5.3cm in length

Adult females range from 4.8 to 6.0cm in length

The Wood Frog is found in every Province and Territory in Canada. In Nova Scotia, they are widely distributed throughout the mainland and Cape Breton Island.

Wood Frogs require shallow, fish-free wetlands for mating. Outside of breeding season, they can be found in damp deciduous and mixed forests. They hibernate in the leaf litter in the forest and foraging mainly occurs in their forested habitats.

These frogs actively hunt during the day and night. They eat a variety of insects and small invertebrates. Favourite prey includes spiders, beetles, moth larvae, slugs, snails and bugs.

Wood Frogs are among the first amphibians to emerge from hibernation in the spring. They are active between March and October. Breeding happens quickly, over a one-to-two-week period in April and May. A process called amplexus is used. This is when the male uses his front leg to grab the females' body, causing her to release the eggs, which are fertilized externally. Breeding males can be recognized from females by the swollen base of the thumbs on their front legs. Females will lay a jelly-like mass of up to 2000 black and white eggs. The egg mass is laid in either shallow water or is attached to aquatic vegetation with 15cm of the water's surface. The tadpoles (larvae) develop quickly and begin transforming in July and August. Males usually mature within one to two years, and females mature in two to three years. Their lifespan is roughly five years after development into an adult. Wood Frogs can survive cold temperatures while hibernating by increasing the amount of glucose in their blood. This acts as a “cryoprotectant”, which means the water is unable to freeze inside the blood cells. blood cells.

Their populations are abundant and believed to be stable. The loss of breeding wetlands and forest habitats do pose significant threats to Wood Frogs. Other factors like climate change, pollution, road mortality, and the use of the herbicides and pesticides also pose long-term health risks for these frogs.