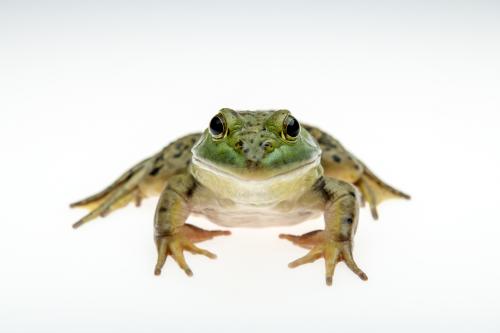 Green frogs are typically yellow, green, olive or brown, with some dark spots on the back and a bright green upper lip. Their belly is white with dark lines or spots, and it sometimes has a yellow tinge. The hind legs have dark lines and webbed toes, while the front feet are unwebbed. Although rare, it is possible to see blue green frogs. This colour happens because of a lack of yellow pigmentation. Tadpoles (larvae) have long tails with a large fin. They do not have front legs. They are dark green with dark markings, spots on their tails and a brown to cream coloured belly. Adult males have bright green to yellow throats, and their tympanum (ear drum) is larger than their eyes. Female tympanums are about the same size or slightly smaller than their eyes. Breeding males can be told from females by the swollen base of the thumbs on the front legs. This is related to the tight holding they do during amplexus (breeding). Green Frogs have a distinct ridge above their eyes that extends part to most of the way down their back. Their vocalizations sound like a loose banjo string and can be heard either singly or as several notes.

Green Frogs can be seen from Manitoba east to the Atlantic Provinces. They are widespread throughout mainland Nova Scotia and Cape Breton Island.

These frogs are common across all freshwater habitats, including lakes, wetlands, ponds and streams. Juveniles may use temporary bodies of water in the summer months but, like adults, require a permanent water body for breeding and hibernation.

Green frogs are active both during the day and at night. They will hunt in aquatic and terrestrial habitats. They eat beetles, slugs, insects, spiders, ants, snails, moths and moth larvae. They have also been known to eat smaller frogs like spring peepers, and their own tadpoles.

Green Frogs hibernate over the winter and are active from April until October. Breeding season happens between June and August, using a process called amplexus. This is when the male uses his front leg to grab the females' body, causing her to release the eggs, which are fertilized externally. Breeding males can be recognized from the females by the swollen base of the thumbs on the front legs, caused by the tight holding during amplexus. The females release up to 5,000 eggs in a film-like mass among the surface vegetation in water less than 50cm deep. The eggs are black and surrounded by two clear, jelly-like envelopes. The eggs will hatch in less than a week. Tadpoles hibernate for either one or two winters in the silt and dead plants at the bottom before developing into adult frogs. Development from tadpole to adult typically occurs the following summer, one year after hatching. Green Frogs reach sexual maturity 1 to 2 years after development into their adult stage. They have a life span of up to 5 years after development from tadpole to frog.

Compared to other frog species, Green Frogs are much more tolerant of habitat disturbance. They do face similar challenges with the loss of wetland and shoreline habitat, road mortality, climate change, pollution and the use of herbicides and pesticides.