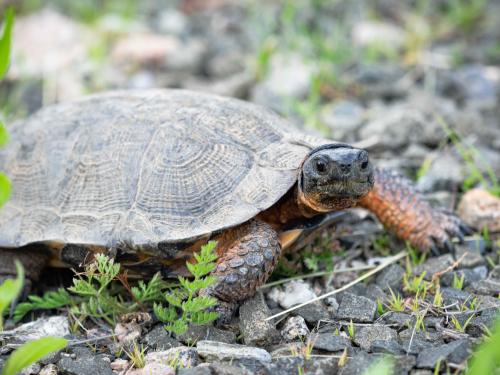 The wood turtle carapace has a sculptured, woody look, with varying amounts of yellow, brown and black. The colours are arranged into lines and patterns that start from the raised section of each scute. Its head is black with orange flecking, while the neck, legs and tail are brown on top and orange underneath. The plastron is yellowish with a large dark blotch on the outside of each scute. In females, the plastron is flat and in males, it’s concave, or ‘curved in’.

In Canada, Wood turtles are found in Nova Scotia, New Brunswick, Southern Quebec and Southern Ontario. They are most common in Northeastern mainland Nova Scotia and Southwestern Cape Breton Island, but individuals have been observed in other river systems in various regions of the Province.

Wood turtles prefer wetlands and moderate to slow-moving streams, deep pools, sand or gravel bars, and the areas along shoreline habitats. In the summer, most of their time is spent in terrestrial habitats that can be found within a few hundred meters of the river. They are regularly observed basking in the sun on muddy riverbanks.

Wood turtles are omnivores. This means they eat plants like leaves and berries, as well as invertebrates like worms and insects. Unlike other Canadian turtles, foraging occurs mainly on land in forests, wetlands, and flood plains.

Wood turtles are active from April until late September or early October. Nesting occurs during the last two weeks of June and the first week of July. They may travel several kilometers to a nesting site. An ideal nesting site is in sand or gravel along the river, and in open areas that receive plenty of sunlight. Females will lay up to 20 eggs, which hatch in late August or September. Unlike most other Canadian turtles, gender is determined by genetics and not egg incubation temperature. Sexual maturity is reached between 14-18 years of age, with individuals living more than 50 years.