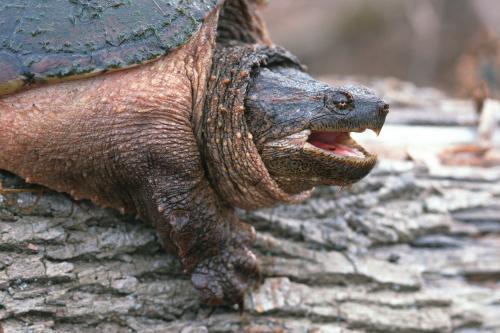 Our largest freshwater turtle can be recognized by its size, webbed feet, large claws, muscular limbs and long tail, or by the sawtooth back edge of its carapace. The carapace is relatively flat and brown, olive or black in colour. It can have a greenish-gray or dark green colour from algae growth. Underneath, its yellow plastron is much smaller than the carapace, so this turtle cannot protect itself by drawing into its shell. This, plus its slowness on dry land, explains the Snapping Turtle’s aggressive behaviour when threatened. Skin colour is typically grey to black, with a slight tan shade on the underside of the limbs and tail.

Hatchlings are 2 to 4cm in length

Up to 50cm carapace length for adults

Snapping turtles range from southern Saskatchewan to the Atlantic Provinces. In Nova Scotia, snapping turtles are most common in the southwestern mainland, and less common northeast of Halifax County.

Snapping turtles have a wide range of habitats, but give preference to shallow, slow-moving waterways. Areas with a softer, muddy or sand bottom, along with an abundance of aquatic vegetation are where you will see them most often. Examples of favored habitats include fens, bogs, swamps, marshes, and shallow bays of lakes and rivers.

They are omnivorous, mainly eating fish, amphibians, plant material and aquatic invertebrates. To a lesser extent, they will also predate reptiles, birds, small mammals, and carrion. Prey is eaten below the water surface.

Snapping turtles are active from late March to October. Females nest in late May to early July and can travel several kilometers to their preferred nesting site. Nests are dug in areas with soft sand, soil or gravel. Ideal nesting sites are in open spaces with high sun exposure and a few hundred meters from the waterline. Common nesting sites include meadows, shorelines, rock outcrops, agricultural fields and roadsides. During the evening and nighttime hours, females will lay approximately 20 to 45 eggs. The temperature of the eggs during development will determine the gender of the hatchlings. Colder temperatures produce females while warmer temperatures produce males, and the eggs will hatch in September. Sexual maturity is reached at 17-19 years old. They are a long-lived species, reaching 70 years of age or older.