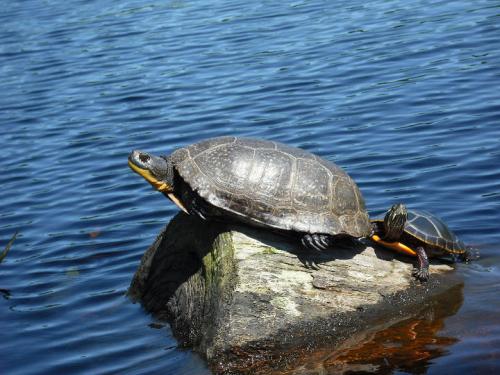 Blanding’s turtles are recognizable by their smooth black or dark brown domed carapace with yellow dots or streaks. The plastron is yellow with black blotches on the corners of each scute - a bony plate of shell. There is a hinge on the plastron that allows the front portion to be pulled closed when the turtle pulls its head and legs into its shell. The top of the head, neck and legs are brown and black with yellow flecks, the chin and throat are bright yellow. Adult males have a concave plastron and a larger tail.

In Canada, the populations in the Great Lakes/St. Lawrence comprise much of its range, with some smaller populations in southern and central Ontario, and a few locations in southwestern Quebec. Nova Scotia has several small, isolated populations of Blanding’s Turtles in Southwestern regions of the Province. Many are found in and around Kejimkujik National Park.

Blanding’s Turtles are found in wetland habitats with shallow water and limited water flow. Areas with an ample supply of organic substrates, like fens, bogs, swamps, marshes, plant-filled coves and lake bays are preferred. These turtles need plenty of vegetation and basking sites, like hummocks, logs and vegetated shorelines.

They are carnivorous, foraging for fish, frogs, frog eggs, and carrion. Blanding’s Turtles will also feed on insects, snails, slugs, worms and other invertebrates.

Blanding’s Turtles hibernate over the winter and are active from late March or April until September or October. Nests are dug in late May to early July in open areas with high sun exposure. Ideal sites have soft sand, soil or gravel and are less than a hundred meters from water. Common nesting sites include forest clearings, meadows, shorelines, agricultural fields and roadsides. During the evening and nighttime hours, females will lay up to 25 eggs. The temperature of the eggs during development will determine the gender of the hatchlings. Colder temperatures produce males while warmer temperatures produce females, and the eggs will hatch in September and October. It takes these turtles up to 25 years to reach sexual maturity, and females only reproduce every 1-3 years. They are a long-lived species, with individuals reaching 80 years old or more.