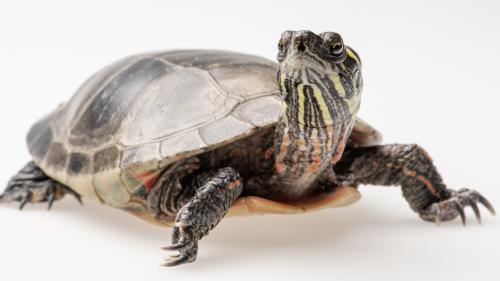 This is the most common and most colourful turtle in Nova Scotia. The carapace is smooth and gently rounded. It is dark green to black with yellow and red markings along the sides and around the edges of the shell plates. The plastron is tan to yellow, and typically unmarked, but may have small dark blotches in the center. The head and legs are black to green with red and yellow streaks. The neck, legs and tail are streaked with red.

In Canada, Painted turtles have the widest range of any freshwater turtle species, occurring from British Columbia to Nova Scotia. In Nova Scotia, painted turtles are common in the Southwestern region of the Province, becoming less common or absent in the Northeast. There are no kmown records from Cape Breton.

Painted turtles occur in a variety of habitats but prefer shallow aquatic habitats with slow-moving water. Look for them in plant-filled ponds, swamps, marshes, lakes and streams, and areas with soft bottoms and plenty of basking areas. They are often seen in groups basking on logs and rocks. They seem to be most common where lily pads and pickerel weed grow.

Painted turtles are omnivorous. They eat a variety of aquatic insects and their larvae, invertebrates - particularly snails, carrion, and small vertebrates like fish and frogs. Small pieces of lily pads and other plant materials also make up part of their diet.

Painted turtles are active from April until early October, and nesting occurs from late May until early July. Nests are dug along roadsides or in cultivated fields, in sand or gravel beaches, forest clearings, meadows and fields. Ideal sites are found in habitats with high sun exposure and within 200m of a water body. The number of eggs a female can lay will depend on her age, size, and how many clutches – or groups, she has already laid. Up to 11 eggs can be laid in a nest and females can have several clutches per year. Hatchlings typically emerge in late September to the end of October; some may overwinter in the nest and emerge the following spring. The egg’s temperature during development determines the gender of the hatchling. Warmer temperatures produce female turtles and cooler temperatures produce males. Females reach sexual maturity around 12-15 years of age and have a life span of approximately 50 years or more.