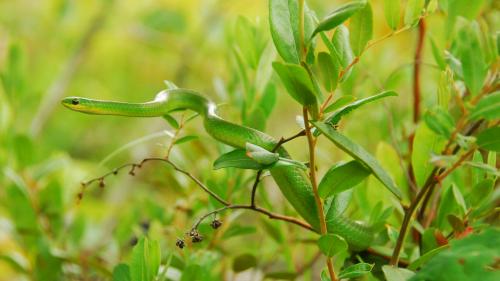 The back and upper sides of the Smooth Green Snake vary from grass-green to yellowish-green. Those with the grass-green coloration are pale greenish-white on their underbelly. In comparison, the yellowish-green variation has a yellowish-white tinge underneath. At birth, young green snakes are a blue-grey to dark green.

In Canada, this snake ranges from southeastern Saskatchewan to Nova Scotia, but is absent from eastern Manitoba and western Ontario, north of Lake Superior. In Nova Scotia, Smooth Green Snakes are widespread across the Province.

Green snakes are found in a variety of habitats, most often in areas with grass and dense vegetation. They may be observed in grassy habitats such as heath or fern roadsides, old fields, shrubby, or dry boggy areas, and can occasionally be found sitting in low-lying vegetation. In suburban areas, they can be observed in lawn and garden areas. Hibernation occurs underground, and is often communal, typically in small mammal burrows, rock crevices, and in other land features that allow them to get below the frost line.

Smooth Green Snakes are insectivores, with most of their diet consisting of caterpillars, crickets, moth larvae, spiders, small insects and slugs.

These snakes breed in the spring or early summer. In the latter part of July to early August, females will lay 3 – 8 eggs in dark, damp environments, like under rocks, stumps, logs or in rotting wood. The eggs should hatch in one to three weeks depending on temperature and are about 2-4cm long. Juveniles mature in about two years, and can live at least six years or more, but little is known about their longevity.

Habitat loss and degradation are common threats, as is road mortality. They do face high predation rates from other snakes, birds and mammals, and domesticated cats.