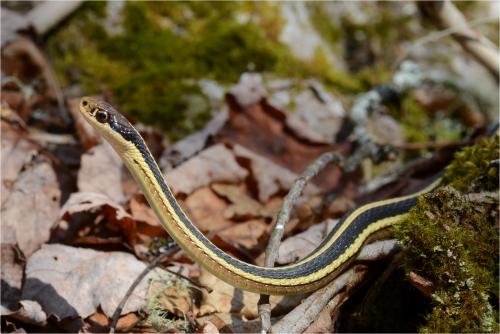 Visually, ribbon snakes resemble garter snakes but are smaller and slenderer. They are dark brown or black in colour, and have three yellow stripes. One stripe goes down the back (dorsal) and one on each side (lateral). There is a white crescent in front of the eye, a white chin, a whitish yellow belly and rust-coloured sides.

These semi-aquatic snakes live in wetlands, and boggy or grassy places along the shorelines of lakes and rivers. They also rely on forested areas for overwintering and birthing sites. Overwintering is often communal and occurs below the frost line in mammal burrows, rock crevices and muskrat lodges.

They predate primarily on amphibians, mainly frogs, as well as small fish and insects.

Ribbon snakes breed in the spring after hibernation. Females give live birth of up to 15 babies in late summer. Juveniles reach maturity in two to three years. Longevity is uncertain but estimated to be approximately 11 years.

Road mortality and the loss of wetland habitat pose significant threats to the ribbon snake population. Additionally, severe impacts from pollution and agricultural runoff are causing declines in amphibian populations, which is a key food source for the ribbon snake.