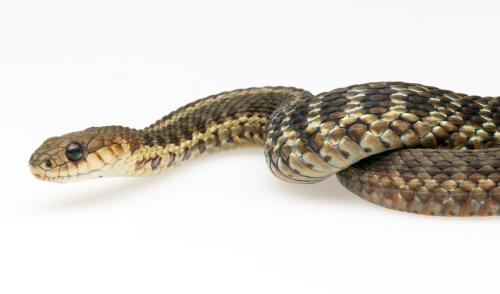 Garter snakes have a wide range of colour variations, but tend to be brown, red or dark green. They have up to three yellow stripes – one dorsal stripe and two lateral stripes. A dorsal stripe extends along the back, while lateral stripes extend along either side of the animal. Most garter snakes have white, brown or black checkered or speckled patterning along the back. Although rare, some are partially to completely black in colour, often referred to as being melanistic.

Garter Snakes are widely distributed throughout North America, from the Southern North West Territories to Costa Rica. The Maritime Garter Snake is one of seven sub-species of Garter Snake, represented throughout Quebec, Nova Scotia, New Brunswick and Prince Edward Island.

They are widespread across Nova Scotia in a variety of habitats, including forests, wetlands, shorelines, fields and rocky areas, farmlands, and some larger coastal islands. They can also be found in many urban areas where they can find shelter under rocks and logs. Garter snakes often overwinter in groups underground below the frost line. Mammal burrows, rock crevices or human made structures often provide a great place to spend the winter months.

Breeding occurs in the spring, soon after the snakes emerge from hibernation. Females give birth between early August to mid-September to live young, ranging in number of 5 to 50 babies per snake. Young snakes develop into mature adults within two to three years. Garter snakes have a life span of up to 20 years.

Road mortality is significant for populations around urban areas or busy roadways. Habitat loss is a threat for all snake species, but Garter snakes can adapt and persist in regions with low to moderate human disturbance.