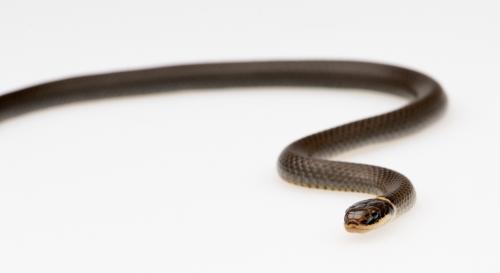 These slender snakes are aptly named for the distinct yellow-orange ring around the neck, which is generally the same colour as their belly - a bright yellow orange with dark edges. They are a solid bluish black or brown in colour along the back and sides.

In Canada, ring-neck snakes range from Ontario east of Lake Superior to Nova Scotia and Prince Edward Island. They are found across Nova Scotia but are most common in the Southwestern and Northeastern mainland regions. Reports from Northern Nova Scotia and Cape Breton are rare.

This snake prefers a woodland habitat and can be seen near forest edges and clearings. They are also common along shorelines, and around streams and bogs. Ring-neck snakes are nocturnal and tend to hide under rocks and fallen logs during the day, becoming more active in the evening hours.

The preferred food is red-backed salamanders, but they will also eat amphibians, slugs, earthworms, and insects. Ring-neck snakes have been known to cannibalize other species of snakes, such as the juvenile red-bellied and smooth green snakes.

These snakes breed in the spring. Females lay up to 10 yellow-white eggs in early summer, typically in dark, damp places, like under rocks, and in rotting wood. At times, females will lay eggs together in a group nest. The eggs will hatch after roughly two months. Young snakes mature in two to three years and have a lifespan of up to 10 years.

Threats include habitat loss and road mortality. This snake is relatively abundant in Canada and most populations are thought to be secure.