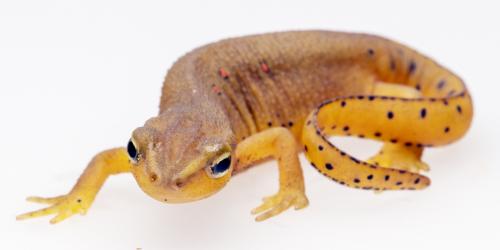 The adults are olive green with a yellow belly, but this can vary based on their age and sex. They have up to 58 small red spots with black borders along the back. Breeding males develop a high wavy crest on their tails. Young adults gradually lose their reddish-orange terrestrial colour (red eft stage) and become yellow. Red-spotted newt tails are flattened lengthwise with a raised top.  The aquatic larvae have feathery gills behind the head, on the legs and on the tail fin.

In Canada, red-spotted newts can be found from central Ontario and east to the Atlantic Provinces. They are common in all regions of mainland Nova Scotia and Cape Breton.

Aquatic adults and larvae prefer wetland habitats with plenty of vegetation. They can be seen in ponds, pools and slow-moving streams. The terrestrial red eft (juvenile) can be found in forested habitats, with habitat preferences given to fields, green spaces and wet meadows.

Males are actively courting females between March and May. Breeding males develop a high, wavy crest on their tail, and black pads on the underside of their hind legs. Males position themselves above the females, gripping her sides behind her front legs with his back legs. Other courtship behaviours include him rubbing her snout with the side of his head and making fanning motions with his tail. Between 200 and 375 eggs are laid individually or in small clumps on the leaves and stems of aquatic plants. By September, the aquatic larvae develop into their juvenile stage called a red eft. The red efts will live in this life stage for up to seven years. They are bright red to orange, with two rows of black bordered spots. They will migrate to lakeshore and woodland habitats to mature for approximately two years. After living in the damp woods, the red efts return to the ponds and streams as adults for the remainder of their lives. Red-spotted newts can live up to 15 years in the wild.

The loss of wetland habitat, pollution, climate change, and the use of herbicides and pesticides all pose a threat to these animals. However, the red-spotted newt is an abundant species throughout its range, and any population threats are minimal for the time being.