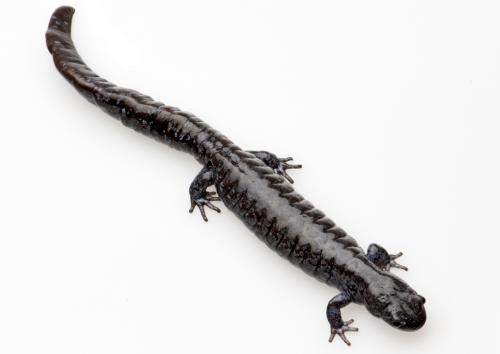 The blue-spotted salamander is dark grey to black. They have varying numbers of pale blue spots along their sides, tail and legs. The belly is dark grey to black with blue flecks. Terrestrial juveniles are light grey to brown with smaller spots. Aquatic larvae are grey-brown with some black colour spots on the tail fin and have feathery gills behind their head and legs.

These salamanders range from southern Manitoba to the Atlantic Provinces. In Nova Scotia, they can be seen in northern regions and Cape Breton, along with a few isolated populations in both Annapolis and Queens counties. They are not typically found along the Atlantic Coast.

Blue-spotted salamanders eat a variety of small invertebrates. While on land in the spring they favour slugs, insects, and earthworms. In the summer and fall they prefer snails, centipedes, earthworms and rove beetles.

Migration to breeding wetlands happens on rainy spring nights. Females will lay up to 550 eggs in jellylike masses. These masses are attached to submerged sticks at the base of plants, stones or other vegetation under the water. Aquatic larvae hatch after a month and develop into terrestrial juveniles by the end of the summer. Sexual maturity is reached at two years old, and individuals breed only once every few years. Longevity is not confirmed but observed individuals have lived to be more than 20 years old.

COSEWIC: Not at Risk

Habitat loss, road mortality, climate change, pollution and run-off from agricultural sites are all contributing hazards for this species. While they can be fatal for individuals and population pockets, blue-spotted salamanders are abundant throughout their range and these threats pose a minimal risk for the time being.