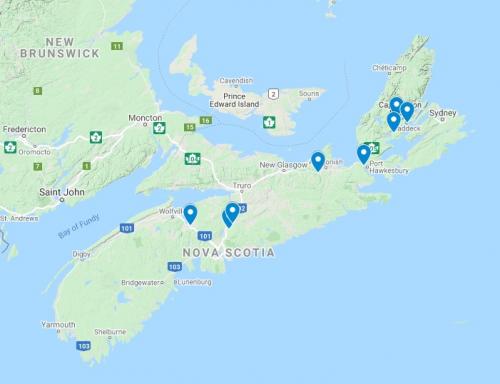 The first mastodon bone found in Nova Scotia was discovered by Alexander “Big Sandy” McCrae around 1834. He came across it while ploughing his fields a short distance from a riverbank. It turned out to be the right femur of an adult mastodon. The bone was excavated from the earth, only about five inches from the surface, and found to be in very good condition. Radiocarbon dating and other evidence places the femur at around 75,000 years old. This means the animal was alive before the last glacial event that covered Nova Scotia in a thick layer of ice. That ice sheet began melting about 15,000 years ago, leaving the bone to be discovered by McCrae all those years later. 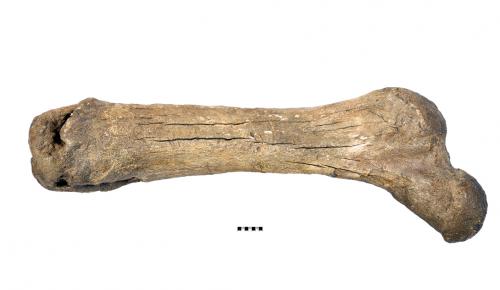 This was the first record of a mastodon tooth found in Nova Scotia. It was discovered on the northwestern side of the Bras D’or lake, only about 14km away from the Middle River femur that was discovered 25 years earlier. The tooth was found in very good condition but was later damaged by its discoverer who decided to “investigate its structure with the aid of a blacksmith’s hammer and vice”. The name of that discoverer is unknown. 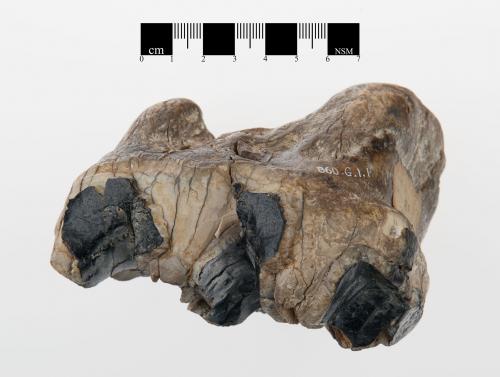 A mastodon tooth was discovered during the construction of the Burnside Naval Magazine. It had been transported to the work site in a load of glacial fill that came from one of several pits around Elmsdale, Nova Scotia. The exact site of its origin is not known.

This specimen wasn’t added to the collection until 1998, though it was discovered long before then. It was originally discovered by Oscar field in the early 50s, while he worked on the construction of the Canso Causeway. Unfortunately, the source of the fill in which the tooth was found is unknown. 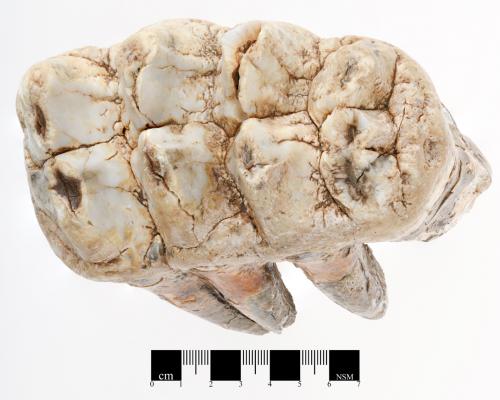 George’s Bank is a shallow area of the ocean on North America’s east coast. It is 240 km long and 120 km wide, extending from Cape Cod, Massachusetts into the ocean. It wasn’t always under water, though. It was connected to the mainland as a peninsula 14,000 years ago, inviting ice age animals to move into its forests and grasslands. As the ice sheet continued to melt and sea level rose, George’s Bank became an island by 11,500 years ago isolating the animals that lived there. By 7000 years ago it would have been completely flooded by the ocean, taking any surviving plants and animals with it.

Several mastodon and mammoth teeth have been discovered in this area by fishermen, hauled up by fishing nets dredging the seafloor. It would likely have been a good place for mastodons to live, with fossil evidence pointing to the presence of mixed forests and marshes. They would have likely enjoyed the mild winters created by the maritime climate.

After a load of gravel was dropped off beside the playing fields of St Francis Xavier University in 1980, there was a surprise discovery. A mastodon tooth was found in the pile by a Bishop Malcolm MacEachern. The glacial gravel came from a quarry in James River, Antigonish. The molar was kept safe in the university’s geology collection for many years before being transferred to the Nova Scotia Museum.

Mining at this gypsum quarry uncovered two tusks and other bone fragments. One of the tusks was found complete, while the other was only partial. These tusks are dated at about 80,000 years old and represent another example of mastodon getting trapped inside a sinkhole. 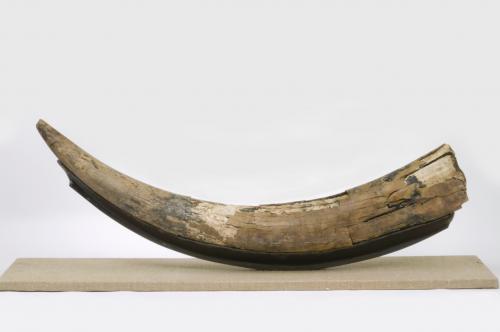 A mastodon traveled through a boggy wetland, feeding on sedge grass and cattails. As it ambled along, a wrong step caused a sinkhole to give way under the massive animal’s weight. Trapped below and unable to escape, it succumbed to injury or hunger. Eventually, its resting place filled with mud, gravel, and vegetation from above, preserving it in place until it was unearthed 80,000 years after it died.

While removing the unwanted sinkhole, an excavator operator at the National Gypsum Quarry noticed a tusk and bones poking out through the earth. They contacted the Curator of Geology, Robert Grantham, who confirmed the significance of their discovery. Museum staff and volunteers began work immediately to carefully excavate the remains before winter weather could destroy it. When the work was complete, they had uncovered the partial skeletons of an adult and juvenile mastodon, along with numerous other plants and animals that had fallen into the sinkhole over time. 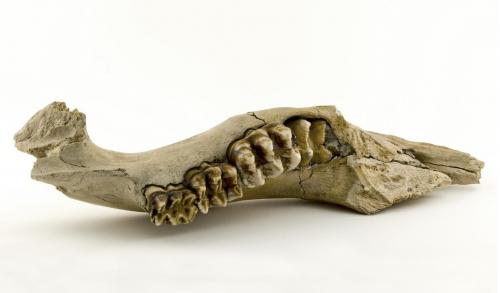 The most recent mastodon fossil discovered was found only a short distance from the 1834 discovery in Middle River. A sinkhole in the Little Narrow Gypsum Quarry yielded a shinbone (tibia), rib, and numerous bone fragments. Like the mastodons discovered in Milford, this animal likely stumbled into a sinkhole and became trapped.

The quarry supervisor was quick to spot the tibia protruding from the rubble after rock was blasted in that area. They contacted the Department of Natural Resources and the Nova Scotia Museum who quickly assembled to excavate the rare find and sift through loose material to for other bone fragments.